Also see our followup: How To Compromise Zcash And Take Over The World

Today, we continue this tradition by reviewing one of the lesser known details of the Zcash cryptocurrency. A few days prior to publication, we reached out to the Zcash team and asked them to review this post for accuracy. We thank them for subsequently posting more details about Zcash's trusted setup.

Type "zcash" into any search engine today and you'll most likely stumble across this WIRED article. Like most coverage of Zcash, the WIRED piece fails to mention the Zcash Catch, otherwise known as its trusted setup.

Given the "All coins are created equal" tagline, some might consider that to be kind of a big deal, deserving of at least a footnote somewhere. But this important detail can't be found on the z.cash website,1 nor in the media coverage about the project.

We'd like to remind the news organizations out there that by covering cryptocurrencies you are effectively advertising a financial instrument. A failure to mention that the instrument comes with a serious catch is, at the very least, a serious breach of ethics, and at worst could potentially run you afoul of the law. (As decentralists who question the ethics of many laws, we are more concerned about the former than the latter, but this is a case where the law and ethics fall into alignment.)

To be clear, most of our concerns regarding Zcash have more to do with how it presents itself, and less to do with its technical approach (although as we'll discuss, we hope for improvements in that area as well).

Neither Zcash nor any other cryptographic algorithms or software we've made contains a backdoor, and they never will. 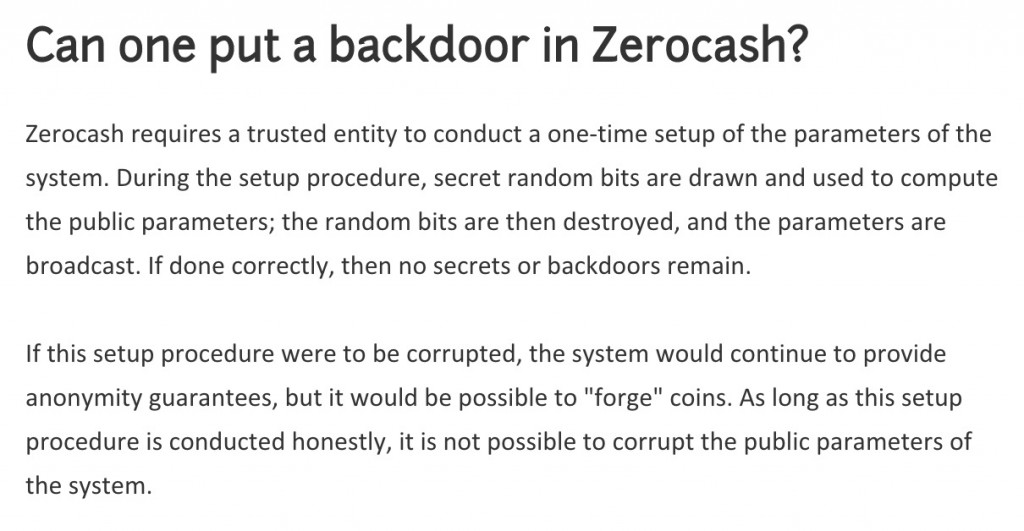 The original answer is the one that should be on the GitHub. After all, Zcash requires trust to work, and hiding the details by using a slightly rephrased question doesn't build confidence. The answer should also acknowledge that Zcash cannot guarantee that they will succeed in the trusted setup.

There is a difference between publishing a paper and peer-review. Outside of those involved with Zcash we've been unable to find peer-review that the entire approach—from the zk-SNARK implementation to the setup—is sound, and that's not from lack of trying. We've asked several of the brightest minds in the cryptocurrency space, and none feel confident enough to implement or teach zk-SNARKs, let alone vouch for the legitimacy of the trusted setup (the details of which were only recently revealed).

Unless Zcash addresses the lack of sufficient clarity and transparency in its communication, it would not surprise us if this approach generates comparisons to that of an elitist group of computer geeks asking the world to trust that they won't, either through intention or incompetence, end up swindling folks out of the magic Internet money Zcash is pushing.

How does the trusted setup work? We'll be honest: we don't understand it entirely ourselves (and that's part of the problem). We would love it if this question was answered on the Zcash mailing list, and if the Zcash team could take some time to explain in simpler, more accessible terms, the precise details of how the trusted setup works.

Though we acknowledge that a lot of effort has been put into securing the trusted setup, it's nevertheless important to ensure that every potential stakeholder in Zcash be informed about it, since:

The good news is the Zcash team says they're investigating alternative approaches.

It would not be completely inaccurate to compare the cryptocurrency community's desire for zk-SNARKs/Zcash to Frodo's relationship with The Ring. 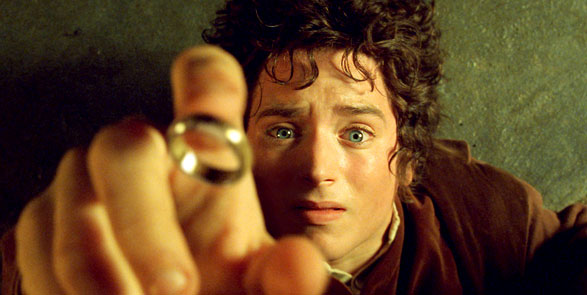 However, as we mentioned before, there are alternatives to using a trusted setup. Zooko does a great job comparing many of them. It's not completely clear, however, that Zooko's assessment of Zcash's choice of zk-SNARKs and the supposed trade-offs with CryptoNote-based coins (like Monero and others), is entirely correct. For example, while Zooko's post states that the amount of a transaction must be revealed in CryptoNote, this may not be true.

Bitcoin already uses zero-knowledge proofs in a way that doesn't put into question the overall properties of the system, and reusable payment codes appear to be a promising privacy-preserving solution (although not as private as Zcash).

Should Zcash proceed with the trusted setup as-is, several important questions remain: That last question points to the Zcash Catch-22: if Zcash delays the trusted setup then they give an adversary more time to find a way to compromise it. On the other hand, if they rush through it then they might miss a better approach they could have taken, or not notice a serious flaw that winds up compromising the system anyway.

We deeply admire and respect your work and we hope it succeeds on its merits. At the same time, we feel that deploying Zcash at this stage, without transparency and without an independent audit of the implementation and the trusted setup, would be unnecessary and inappropriate. We also feel it is Zcash's responsibility to ensure that every potential user/investor in Zcash understands the implications of its trusted setup, and that requires going out of your way to inform them.

As when opening a bank account or purchasing insurance, it's the seller's responsibility to ensure that the buyer is able to make an informed purchasing decision. If the trusted setup is used, potential investors need to know that Zcash comes with several asterisks:

1 That sentence was written prior to the recent blog post, however we've decided to keep it as-is for now since the post is buried where most Zcash users/investors won't see it and, even if they do, many won't fully grok the implications of the trusted setup unless it's written in clearly visible, simple terms.

Donating = Loving! You can empower our work by donating!